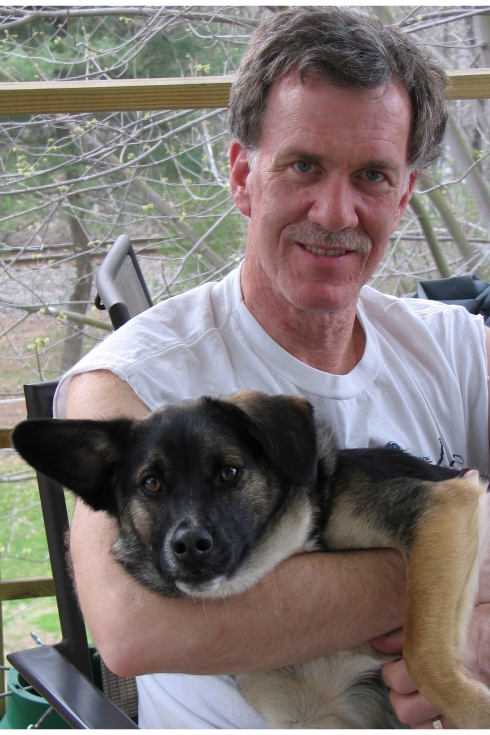 Just once in my life I’d like to have a dog that simply dies in his sleep. I think it would be easier for me. Then I wouldn’t have to play God and decide when it’s right to set him free. I’m no expert. Does he eat well? Does he still play? Is he in pain? That’s a hard, hard choice to make and it surely should weigh heavily upon a human to do that. But then, it’s not about me, is it?

Yesterday, I made the difficult decision to euthanize Data (Diego, if you ask my stepdaughter, whose dog he officially was). He had spent the past 15 years as a faithful companion. First, the family dog (Jennifer, Charlie and I) and then, once Jennifer hit college, essentially Charlie’s and my dog. And when Charlie died last year, mine. But truth be told, he bonded to me although I did my best to be hands off since he WAS Jennifer’s. Dogs do what they do and choose their human. Still, he was an equal-opportunity companion. He loved pretty much everyone. And he only grinned for Jennifer.

So, it was been a hard, weepy day. It’s a loss, no matter what. As happens when a pet dies, animal lovers step up. They understand. They offer condolences and sympathy. And that’s a great support system. But what many of them probably don’t realize is that this is about far more than the death of a long-time canine companion.

It’s probably more about the closing of yet another door to what once was for me. And with the shutting of that door, as gentle as it was (and it was very gentle), comes an easy slip back into that liminal space I had basically emerged from. It won’t be a long return, but it is a return visit, nonetheless.

And with that detour comes a mourning that’s deeper than the loss of a pet. Data was ready to go. He was tired. Physically, he was failing. Eyesight, hindquarters, tumor, hearing. Still, he ate and, until the last two days, navigated out the door and into the yard. We knew immediately it was right because as the veterinarian injected him, he sighed, gently laid his muzzle into my hand, and slipped very quickly away. Such a graceful moment, and both Jennifer and I knew we had released him well.

So why the tears? Partly for him, that he couldn’t live forever. Partly for me, that I no longer have his company following me around like a shadow. And partly, maybe even largely, because with his death, I’m now deeper into new territory. I can see, smell and taste “what will be” territory, which is the destination that follows “what once was.” But to get there I need a brief return vacation in that liminal space, the space in between those two destinations. You might call it a stopping off place, as CS Lewis wrote. A place where you catch your breath, figure out which way to go, maybe even rest a bit and do some soul searching.

For me, beyond the pang of losing such a sweet canine companion, is the knowledge that I shut the door, even though it was time. I shut it. I did it. And that’s a metaphor of sorts for shutting the door on my life as it was – with Charlie, with Data, with a certain vision of what it was to be, my life. And now all I have is an obscured vision of what will become. Sure. it’s also my life, but it’s new and it’s different and it’s at the same time unknown.

I’m a little surprised to welcome this foray back into liminal space … but only for the time being, not for long. I’m ready to move, eager to discover, but I’m not quite prepared to begin that journey in earnest. Yes, I shut the door, but I’m resting here, in this stopping off place between worlds, before opening the new one I can see across the way.

So, here it is. I mourn the loss of that goofball dog. But the scope of that mourning is far, far bigger. It’s a monumental moment for me. I take that very seriously indeed.