I picked up a new book the other day, the same way I always do. I read a few passages – often but not always (contrary to popular belief) the last couple of pages. If the turn of phrase is fresh, the viewpoint authentic, and the story laden with the promise of insight and deep reflection, it’s mine.

So, I’m not done with Tommy Wallach’s “Thanks for the Trouble,” but a few days ago I ran into a passage that resonated:

“My dad’s favorite character was Orpheus, the famous musician who was allowed to bring his dead wife back from Hades, as long as he could make it to the surface without checking to see if she was actually behind him. But he peeked, and ended up losing her forever. I always thought Orpheus got kinda screwed there. I mean, would you trust the Lord of the Underworld not to mess with you? But my dad said it was the most perfect myth ever written, because it represented the most fundamental human error: we all look back.”

Then yesterday, I’m at work on the fourth floor, sitting at my desk next to the window, when I glimpse the first swing of a yellow hydraulic excavator as it slams into the stately three-story green building one block away. We’re getting a new Sheetz (yay) but I never realized, I guess, that the historic structure needed to pass on to the under 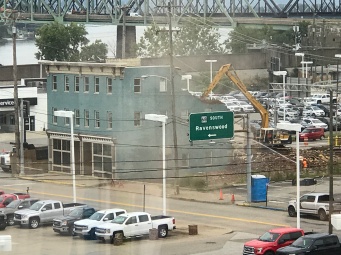 world to make way. The process was mesmerizing, watching that giant mechanical T-Rex nibbling away at the beautifully painted bricks that had stood silently on that corner for at least 100 years.

This morning I drove past what remained standing – three jagged sides, so rudely cut down to one story, gaping windows and doors allowing passing drivers to glimpse the rubble inside. It was a window to the past. You could look in, but you could never return.  A Quantum Flirt of the finest kind.

So what’s the takeaway for me? I guess I’m grateful that life is constantly changing. Each year, each day, each moment and second, I change. It’s when I look backward that I feel a sense of loss or longing. It’s funny. Unlike Wallach and his protagonist Parker Sante, I don’t believe looking backward is an error, exactly. Nor is it particularly a strength. It’s just a sign that I’m human. And what I am reminded of is that recognizing and appreciating the past is crucial to allowing me to fully experience the moment in all its changing momentum. This current moment is what I have. Not the past. Not the future. I have this moment, and then the next, and the next after that. It’s that simple.