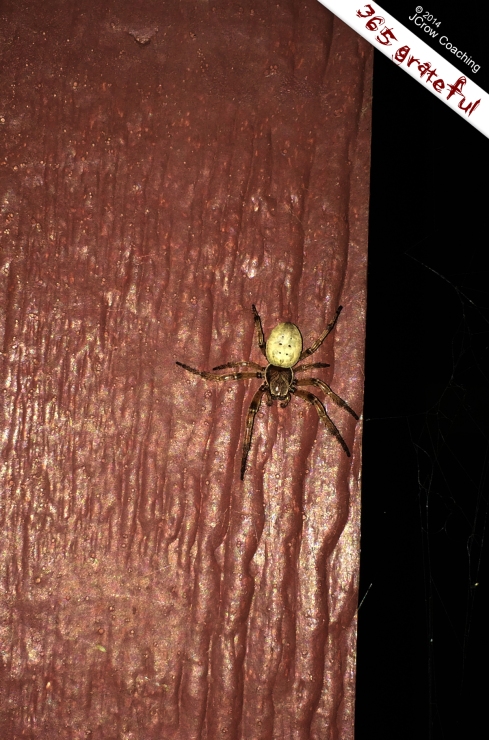 Let’s talk Quantum Flirts. I’m prepping for a weekend women’s retreat focusing on relationships, and one exercise will deal with quantum flirts — short-lived, transient flashes that catch our attention as we go about our daily lives. Quantum flirts are nothing more than the universe winking at us, but we have a tendency to barely notice them and pretty quickly forget them. If we take the time to unfold their possible meaning in light of any issue we’re chewing on at the time, quantum flirts have the potential to impart great wisdom, mind-changing “aha’s,” and shifts in perception.

A few days ago I stepped outside at the very cusp of dawn only to notice a garden spider hanging motionless in its glorious web by the gate. But the light was weak, my phone was by my bed, and when I made it back out that afternoon, all traces were gone, courtesy of Wes, who had mowed just 15 minutes before. Last night I stopped by our new house, reached to lift the garage door, and encountered a Granddaddy Long Legs, the favorite spider dancer of children everywhere. But I was in a hurry, and when I left, he was nowhere to be found.

So, tonight, while browsing sheds at Lowe’s, we encountered another fuzzy fellow. I can take a hint, even if the universe must wink at me several times. I’m grateful for its perseverance and willingness to put spiders in my path until I stop to unfold those eight-legged, multiple-eyed quantum flirts.

And what I get is this: A brilliant reminder to live authentically and to be true to my purpose — which so long ago bubbled up during my coach training. Over the past several weeks, the world has been flirting that mission back toward me, for I have let it lie fallow for a while. I’m grateful for that message. It calls me back to authenticity.

I am a storyteller, weaving light into life and meaning from chaos.

Even today, that knowledge activates goosebumps and perhaps the prickle of tears, both of which signal the presence of truth.

I feel a bit like Arachne, the Greek weaver who was turned into a spider by the goddess Athena so she might weave for all time. What a blessing! What a curse! Yet, I reaffirm that purpose, thanks to the arachnids that have crossed my path lately — weaving wondrous webs to glisten in the morning light, skittering daintily across garage doors, and barring my way into a shed.

I’ll keep weaving whatever I’m weaving into a tapestry that forms not only my life but my purpose … and adding threads both seen and unseen from others’ lives, too.