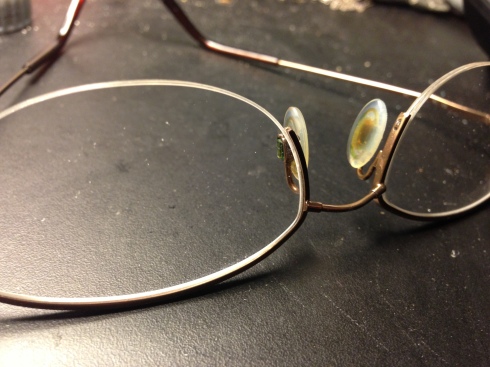 A few minutes ago I pulled my attention back to the here and now (from God knows where it had wandered). When I did that, I realized everything I was seeing was cloudy, dull, smudged. So I did what I’d needed to do for a few days: pulled out a lens cleaner and wiped off my eyeglasses. Voila! A whole new landscape appeared before me.

Amazing, isn’t it, what a simple thing like cleaning your glasses can do for your perspective? Believe it or not, but it can actually be life-changing.

A few days ago a 20-something friend texted me, out of the blue, seeking some help with a relationship issue. Now, texting probably isn’t the best mode for coaching, but I’m always game for new things. What emerged was this: my young friend was deepening a romantic relationship, thinking that quite probably “this is the one.”

The text that zipped back was filled with angst, though, because my friend was hoping to figure out a way to increase his assurance and self-confidence in the relationship.

Oh, Lord. Don’t we all want that? I’m 30+ years his senior and, if I knew the answers, I’d be rich by now. Of course, coaching’s not about having answers; it’s about asking really good questions. So I wiggled my fingers (for texting), rolled up my sleeves, and began helping my friend dig into what, exactly, was getting in the way of his feeling assured and self confident about the relationship.

What eased out over the next 45 minutes was this: A prior, very important relationship had, well, gone south, leaving my friend floundering and unsure for a while. But as it’s wont to do, life goes on. Soon enough, a new relationship walked through the door, brightening the days and adding enjoyment and meaning.

The sticky part? Like most of us, my friend apparently hadn’t cleaned off the ol’ spectacles before moving into that new relationship.

Think about it. What happens when we don’t clean our lenses? As I discovered today, when I wear glasses that carry the fingerprints and smudges of the past several days or weeks – or months, in some cases – I’m not only NOT seeing clearly, but my perspective is warped. What I see is likely to be inaccurate or, in some cases, even unreal. It was the same thing for my young friend.

The gist of it was this: his ex-girlfriend had said (many times, apparently), “I’m the best thing you’ll ever have.” Now, that’s an opinion, for sure, but it’s far and away the opinion of the person saying it. In fact, it’s more a reflection of her issues and her self-perception than anything real about him. But because that opinion was voiced and re-voiced, reiterated and repeated, somewhere along the way my friend began believing it. She handed him that opinion and he accepted it as his own, eventually codifying it as one of many “Relationship Laws.” But what we decided was this: he doesn’t have to keep that opinion; he’s free to give it back, which is exactly what he’s done.

What my friend finally worked his head around was the fact that there was a ghost in his current relationship – the ex – whose opinion (something he’d accepted and turned into a “law”) had never been subjected to a reality check as this new relationship began to unfold.

I’m happy to say that we busted that one loose – and really, it was my friend’s “light bulb” moment that did it. See, he figuratively took off and cleaned his eyeglasses. When he stuck them back on, he was able to see how his old opinions and beliefs had been coloring and changing his perspective about this new, promising relationship. So instead of angst-ridden worry, he now sees how exciting, real, true, and worthwhile this relationship is. Better yet, it’s a launching a new perspective about self-worth and self-belief. I’m sure it will strengthen him in many other ways, too, because it’s a life-changing perspective switch.

Now, I’m smart enough to know it takes time to repeal a law, but I believe the process is firmly under way for my young friend. His codified statute is being repealed, which is awesome.

Although my friend’s light bulb moment was entirely his, it also generated my own eyeglass aha – albeit a day later. I think we’ve stumbled onto a great metaphor that works well for any relationship – lovers or friends, parents or kids, bosses or employees. Best of all, I don’t think it’s limited to eyeglasses. Try this twist:

Most of us wash dishes and drinking glasses between uses, right? If we pull out a “clean” glass only to discover it still has something left over from the prior use, we rinse it or wash it again don’t we? (OK, most of us do). Well, why wouldn’t we do the same thing for such matters as how we view ourselves, what we take away from past experiences, or how we approach a problem? We have this tendency, like my young friend, to internalize opinions, comments, one-time occurrences, and flukes – codify them as laws – governing how we behave, think, and proceed in life.

So my takeaway from this 45-minute text-based coaching is actually pretty powerful. It tells us we should clean our glasses frequently, challenge the view, and make sure we’re looking at reality, not some distorted, smudgy, unclear version that sucks out the heart of our view.

Not too shabby for text-based coaching, eh?

One thought on “Clean your glasses once in a while”