I’m at lunch with Angela when she pulls out some cash. “Look at this,” she says. “I’ve been holding onto it because I think it’s cute, and I kinda hate to use it, but I’m going to anyway.” 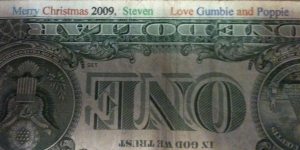 It was a dollar bill, not particularly crisp. On the back in the margin (upside down, to boot) were the printed words: “Merry Christmas 2009, Steven    Love, Gumbie and Poppie.”

Now, I don’t know anyone named Gumbie and Poppie, but I’m assuming that’s shorthand for Grandma and Grandpa. And I know a few Stevens, but none young enough to have received a dollar bill in 2009 as a Christmas gift inscribed by Gumbie and Poppie.

But here we are at the Crystal Café, fixing to pay for a most excellent lunch, and there is Steven’s dollar in Angela’s billfold. I find myself wondering just what Steven got for that dollar – was it something he’d hoped for and coveted? Did he hot-foot it to the bank for deposit into his college fund? Maybe it was something in the food line, a tasty treat that capped off a special event. But even more than that, I wonder where that dollar bill has traveled – after all, Christmas 2009 was a good 2½ years ago. Now, in June 2012, those words are still floating around.

Oh, watch what you say, because in my experience, words have a pretty long half-life. And you never quite know who will hear them or read them (or repeat them) or even tweak them in the future.

As much as I love to see “aha” moments – those “light bulbs” clicking on above people’s heads – I’ve learned they don’t often do that in real life. Well, not usually until later – sometimes much later. After weeks and months and even years, I’ve had people tell me they’d been thinking just the other day about what we’d talked about so long ago – whether in a coaching session or just in a good, healthy discussion – and darned if the light bulb didn’t go off for them. Maybe the original situation just wasn’t right for that insight to illuminate, but the words? Ah, the words obviously stuck around until the right time arrived.

Words are such powerful things. We can hurt with them, leaving wounds that fester or that heal over but still bubble deep inside, so tender and easily uncovered. I’d bet that every one of us can recall words from childhood as easily as words from yesterday, so carelessly flung out by friends, enemies, and frenemies alike, that still float around like Steven’s Christmas dollar. Sometimes we scrape the skin, surprised at how tender it remains as the pain flares up anew.

Those words may have emerged in anger, tossed out in an effort to hurt. Sometimes they flew out as gossip or some careless remark, with no thought spared. Sometimes they found life in well-meaning but misguided comments.

I have to wonder: like Steven’s dollar, where did those words go? Once they left their creator and found us, did we take them to heart and internalize them to the point they took on a life of their own, becoming a gremlin, a saboteur, a critic, a judge? Those are the words that whisper in our ears, “you can’t do that … you’ll get hurt, you’ll look stupid, people will laugh, you’re not good enough, smart enough, pretty enough, funny enough.” They’re insidious, and they’re wrong on every level.

To this day, I vividly recall a good friend pulling me off to the side one evening, telling me, “Men don’t really like women who are too smart, who know the answers.”

Really. Huh. Thankfully, I never took that one to heart, but that was more than 25 years ago, and look! Those words still hover in the air. There were times when I almost invited them in, too, but I knew I’d never respect myself for being less than authentic, and that stopped me, every time.

Words. Yes, they can hurt. Especially when they bubble out without much thought or care for others. But still, I love them, because they can also affirm, support, and uplift. They can cause “aha” moments and spontaneous light bulbs. They can invite insight, prompt growth, coerce a smile. They can launch cleansing tears and elicit achingly beautiful visions.

So that’s how I’d like to free my words – authentically, with care and precision and an eye toward where they’ll travel once they leave the sanctuary of my mind – before I turn them loose to live and thrive, whether on Facebook or in someone’s psyche. But words are tricky, and I’m not always able to catch them before releasing them, especially when anger, hurt, or indignation take over.

But like Steven’s Gumbie and Poppie, who lovingly printed their Christmas wish on the back of a dollar bill, I hope that most of the words I release continue to float around and inspire an “aha” moment or bring a smile to someone’s face as they recall a conversation. That would be a legacy to be proud of.