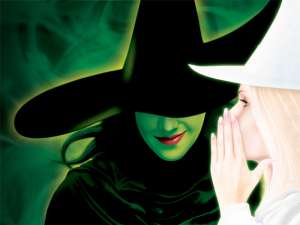 In the Broadway musical Wicked, we’re treated to a slice of life in the Land of Oz … long before Dorothy drops in. Elphaba (you may know her better as the Wicked Witch of the West – or Margaret Hamilton in green makeup if you’re a movie fan) and Glinda (the Good Witch) sing a truly poignant duet about their effect on each other. The hauntingly beautiful song points out that neither one can say if they’ve been changed for the better … but because they knew one another for a time as friends, they agree that they’ve been changed for good. Of course, the song ends with them acknowledging that, yes, it was for the better, even though the two pursue their separate destinies.

For some reason, that really shot a shiver of awareness right through me, and that usually means there’s something true and powerful there. Because I’m a recovering Diva (it’s true!), I find tremendous meaning in music and artistic endeavors. I look for the truth in songs and movies and books and such – at least the truth for me. I hear this song and immediately it forces me to focus my attention on an individual whose betrayal to me was pretty massive and irreversible. I can’t help but wince and avert my eyes, and I have to forcibly keep my mind from gliding blithely past the import of the two witches’ words:

Damn. I really didn’t see this coming.  Every molecule of my body wants to say those words don’t apply to our failed friendship.  I shrink in horror, mentally burying that thought. But it’s fruitless. There’s not enough dirt to make it stay buried.

And so it begins. I sigh and then mentally grab my mind with both hands, forcing myself to consider why this song and those words ring so true and taste so bitter. It’s quick, this deliberation – surprisingly painless – and I can’t deny a bit of it. Unbidden, my mind turns to that proverbial cloud with the silver lining – the silver lining that comes from adversity.

Ah, yes. There’s that “aha” moment. There’s the interpretation that allows all those little puzzle pieces to click into place. Good often comes of adversity, and this is no different. Funny how simply making that connection can change everything in an instant.

At some point in time (many, actually), we all will wrestle with failure, disappointment, or a  hurtful event. Some are small and easily forgotten, some cast long shadows, and some loom over us like vultures. Regardless of the magnitude, never are we more engulfed in hotter flames than when something goes terribly wrong. Those flames leave behind their own reminders in the form of charred rubble and ashes. No wonder that, for a time, we can’t abide the sight or the memory.

But as a coach, I encourage people – when they’re ready – to grab a big stick and sift through those ashes. Dig, I say. Not to stir up the past — that’s none of coaching’s business — but to understand their direction  — what has propelled them here and what will propel them toward their future. What gems do they see? There are sure to be gems. What good things arose, like the mythical Phoenix, from the ashes where the fire burned hottest? Pick them up, I say. Hold on to them.

I realize I have to be real, here, too. If I encourage others to root around in the ashes, I can do no less. So with this lovely melody in my ears, I grab a stick and begin.

It’s a powerful, eye-opening moment for me. Have I been changed for good? Oh, absolutely. I have been changed forever; there’ll be no turning back to the person I was before. If I broaden my view to older flash fires, I change my perspective even more. Behold! There are older gems in my pockets from earlier disappointments. Some are large … some are small … all still glitter.

A ruby filled with wisdom. An emerald glowing with strength. A pearl of understanding. A diamond glittering with renewal. A centered existence.

Every single one is an incredibly powerful change, and every single one I found by rooting around in the ashes.  Sure, if I’d had my way, I’d never have experienced such fires, but they’re a part of life. That fire — all of those fires — are responsible for the person I have become in this moment. I happen to like that person.

And that’s the rub for me, at least. Frankly, I didn’t want to admit that I’d been changed for the better by what happened a few years ago. And maybe that translates into not wanting to give credit to someone else. But the truth is the truth, and it will not be buried, no matter how much dirt I heap on top.

Now that I’ve actually stirred through the debris and discovered the gems hidden there, I notice something else. It doesn’t hurt so much. I’m actually OK with acknowledging, like Glinda and Elphaba, that, yes, I’ve been changed – not only for good but for the better.

Somehow that stirs a skiff of air that smells a lot like gratitude, which catches me completely off guard. It’s fresh, though, and pushes away the lingering smell of smoke. I’m working on that.